The Muslims of Sri Lanka suffered heavily during colonial rule under the Portuguese and Dutch for nearly three centuries from 1505. In education they were in a state of regression. In 1796 the British replaced the Dutch, who were more tolerant but the Muslims were far behind in education. Despite the pioneering efforts of the leaders, Siddi Lebbe, Wappichi Marikar, I.L.M.Abdul Azeez and others, the Muslims were conspicuously unrepresented in holding high positions in the administration and the professions.

In 1935, Marhoom Dr. A.M.A.Azeez, the first Muslim Civil Servant and eminent educationist, realised that the main reason was that many Muslim students were unable to obtain education at all levels and abandoned higher studies because of their poverty. He was convinced that an attempt to improve the lot of the Muslims in all spheres should give top priority to education. This was amply proved during his tenure as A.G.A. in Kalmunai in the early 1940’s, and the Kalmunai Muslim Educational Society was formed.

Marhoom Azeez was the Architect and Founder of the CMSF and was ably supported by another eminent leader and educationist, Marhoom Dr. T.B.Jayah, who said that he could not think of a more deserving cause for the uplift of the Muslims than the CMSF. They rallied round leading Muslims and philanthropists and founded the CMSF in 1945. Marhoom Dr. M.C.M.Kaleel was the first President.

The objective of the CMSF “is to see that no Muslim scholar capable and deserving in any part of the Island is deprived of the education he or she deserves for want of money “.

The CMSF is the pioneering organisation in its field. An unique feature is that the assistance is given as interest free loans which the students must pay back when they are in a position to do so. It gives them a sense of dignity and they are morally obliged to repay in order to benefit others like themselves. This is in the best tradition of Islam with its fine sense of brotherhood.

With the repayments and with annual donations by past scholars by way of gratitude, this ingenious scheme envisaged the CMSF to continue forever as a Revolving Fund. Thus the charity of the donor lasts forever, as donations are recycled over and over again through the CMSF.

A cherished aim of the founders was to establish Endowment Funds in memory of loved ones at the very inception of the CMSF. This scheme has been very successful.

Over the last 72 years there has been much interest shown in education by the Muslim community and there are a large number of professionals and others holding high positions today. Thus the Muslims cannot be considered as backward in education now-thanks to the immense contribution made by the founding fathers of the CMSF in other spheres of education as well.

The CMSF has played a significant role for nearly 72 years and is a Landmark in the History of Muslim Education. 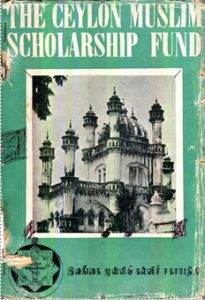 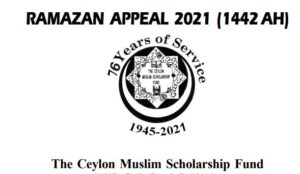