RAMAZAN APPEAL 2022 (1443 AH) Alhamdulillah! The CMSF has completed over 76 years of dedicated service to education. With the generous support of our donors and well-wishers, the CMSF has been able to achieve the farsighted vision of the founders in assisting over 2000 needy Muslim students to pursue higher education. Many held or are holding high positions in Sri Lanka and overseas. Some have received National Honours.

At present the CMSF is assisting a large number of students in Universities, other seats of higher learning and those pursuing professional courses. They are from all parts of Sri Lanka.Since May 2009, the internally displaced students from Jaffna and Mannar Districts are still anxiously awaiting to be resettled in a fair and proper manner. The facilities in schools have to be greatly improved to cater to the students. Scholars have been assisted not only in Sri Lanka but in foreign countries as well. Some were given assistance for post-graduate studies.

The need for assistance is ever increasing and never ending with the new challenges of the times including the problem of refugee students at all levels of education. The CMSF is now gearing itself towards meeting the present and future challenges in higher education and guide students in their career. Donations are credited to the General Fund, and separate Endowment Funds are also administered for large donations. This scheme is popular and has become the mainstay of the CMSF.

During this sacred season of Ramazan when Zakath and Sadaqua are in the forefront, the CMSF appeals to the Community to contribute generously to either of the two schemes of the CMSF in order to continue the good work. What is more creditable than educating deserving youth.

The CMSF was incorporated by Act of Parliament No.19 of 1946 and was recognised as an Approved Charity for tax exemptions by Ceylon Government Gazette Extraordinary No 10,358 of Friday, February 22,1952. The Holy Quran speaks of knowledge as the greatest wealth “And whosoever is given knowledge, he indeed is given great wealth” (2:269) 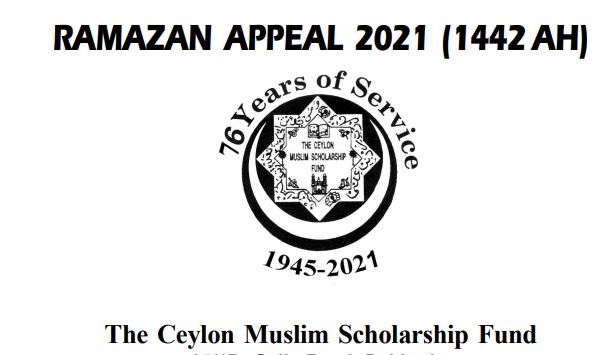 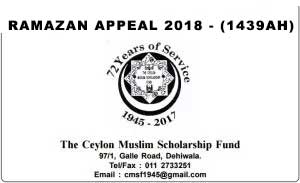